Chandeleur (“shan-duh-leer”) Island Brewing Company is named after the 50 miles of uninhabited islands along the coast of Mississippi. The Chandeleur Islands are home to some of the best redfish and speckled trout fishing on the planet.

Don’t let this be their last call! There are only seven species of sea turtles in our world’s oceans and many of them are threatened with extinction, including the Kemp’s ridley.

Kemp’s Conservator is a 5% ABV Munich Dunkel with deep aromas of milk chocolate and fudge precede rich and toasty bread flavors. A smooth yeast character showcases the beautiful German malt with a hop balance that makes this beer go down easy.

Proceeds from beer sales will go directly towards Mississippi Aquarium’s research and conservation efforts for the Kemp’s ridley. 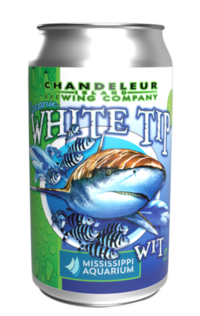 Sip, Sip, Hooray! Oceanic White Tip Wit was the first in a series of limited-edition conservation beers that support and promote the conservation efforts of the Aquarium. There are over 13,000 sharks and ray around the world and many of them are threatened with extinction. The oceanic whitetip was selected as a representative for a signature species, the whitetip reef shark that will be at Mississippi Aquarium.  The Oceanic whitetip shark is a vulnerable species with its numbers declining drastically.

Oceanic White Tip Wit is a Belgian wit beer brewed with pilsner malt and unmalted white wheat lending notes of bread dough and a soft and creamy mouthfeel.  The expressive Belgian yeast provides spicy notes of clove and vanilla while the addition of key lime juice lends a tart and refreshing finish. 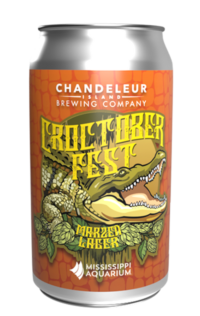 Meet the second brew in the conservation beer series, Croctober Fest Marzen Lager. There are 24 species of crocodilians found around the world and several of them are critically endangered. In the Southeastern United States, the American alligator was a conservation success story. The American crocodile can be found around the southern tip of Florida and is a vulnerable species.

Support the conservation of the oceanic whitetip sharks by purchasing one of our Mississippi Aquarium Series Longsleeve White Tip shirts. All profits from the sale of these shirts go back to the aquarium.

These shirts are made of a comfortable polyester material that functions as a quick dry and protects from UV rays. Perfect wear for the Mississippi Gulf Coast and and for outdoor adventures and exercise. Available in multiple sizes.

Visit our taproom to purchase.

We are proud to announce our support for the Tarpon Tagging Project. Because we’re committed to the conservation of tarpon and understand that fishing is more than a simple pastime; we’ve teamed with Coastal Conservation Association and fisheries scientists to bring you the “Tarpon Tagging Box”. A portion of the proceeds from the sale of this beer go to support local tarpon migration research.

For every Tarpon 12 Pack sold, we’ll donate a portion of the proceeds towards local tarpon migration research. Purchase your 12 pack from the Chandeleur Islands Brewing Company taproom.

To support the cause directly, consider making a financial donation. 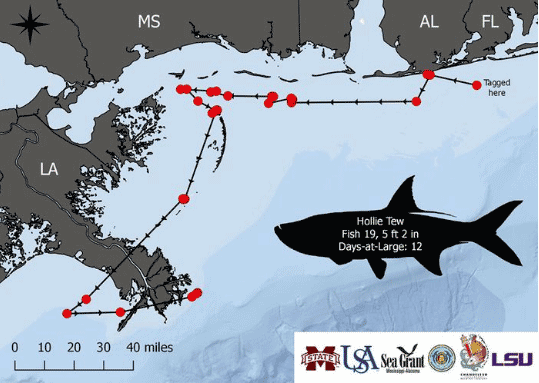 This article was originally published at al.com

Every year at this time, hordes of gigantic silver fish show up along the Alabama coast, setting off the brief but spectacular reign of the Silver King.

Schools of mighty tarpon, typically five to six feet long and weighing in at up to 200 pounds, arrive along our beaches just as summer is at its hottest. While the timing of their annual migration is well documented by scientists, fishermen, and historic records, there is much we don’t know about these giant and ancient fish, including where they go after they leave the Alabama coast. 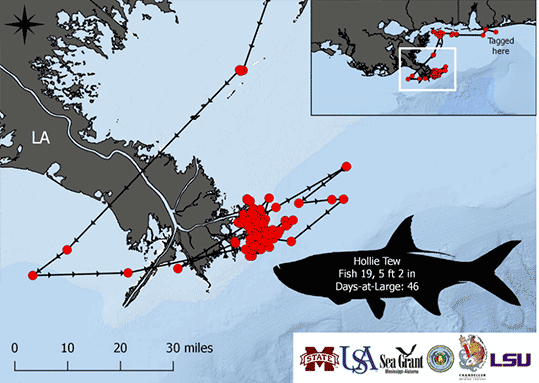 We have not one, but TWO pieces of good news for you today! 😃

1️⃣ A month ago, we announced that our tagged ADSFR tarpon, caught by Hollie Tew, was on the move. We’re happy to share that the tag is still attached and has provided us with 46 days of data so far! For the past couple of weeks, Hollie’s fish has been hanging out at the eastern tip of the Louisiana bird’s foot. Check out the map below to see the fish’s journey from the day it was tagged through Friday, August 30.